Tuesday was the earliest day the case had been expected to resume.

The homicide trial for Chandler Halderson, who is accused of killing his parents over the summer, will resume on Tuesday.
By Juliana Tornabene and Nick Viviani

MADISON, Wis. (WMTV) - The homicide trial for Chandler Halderson, who is accused of killing his parents over the summer, will resume on Tuesday, a Dane Co. judge has determined. Court records indicate the trial will start again at 8:30 a.m. that day.

The case has been on hold since Wednesday when it was revealed after court had been adjourned for the day that Halderson tested positive for COVID-19. Following the announcement and after consulting with lawyers from both sides, Judge John Hyland suspended the trial, telling jurors that they would likely not return until next week, and he would provide them with an update on Friday.

While jurors had been informed that the case was being stopped because someone tested positive for the virus, Judge Hyland did not tell them it was Halderson, after his defense attorneys argued that could bias the jury against their client.

Tuesday was the earliest that Hyland had indicated to them that the case would resume. Dane Co. court will not be in session on Monday, to mark Dr. Martin Luther King Jr. Day.

Right now in Dane County jail, if an inmate tests positive for Covid 19, they are isolated for ten days from the day of the test. Halderson was tested last Monday, which makes this upcoming Tuesday nine days from the test, not ten. The court had to ask special permission from the jail to get this rule amended for the trial to start Tuesday.

The history of the Halderson investigation

The history of the Halderson investigation 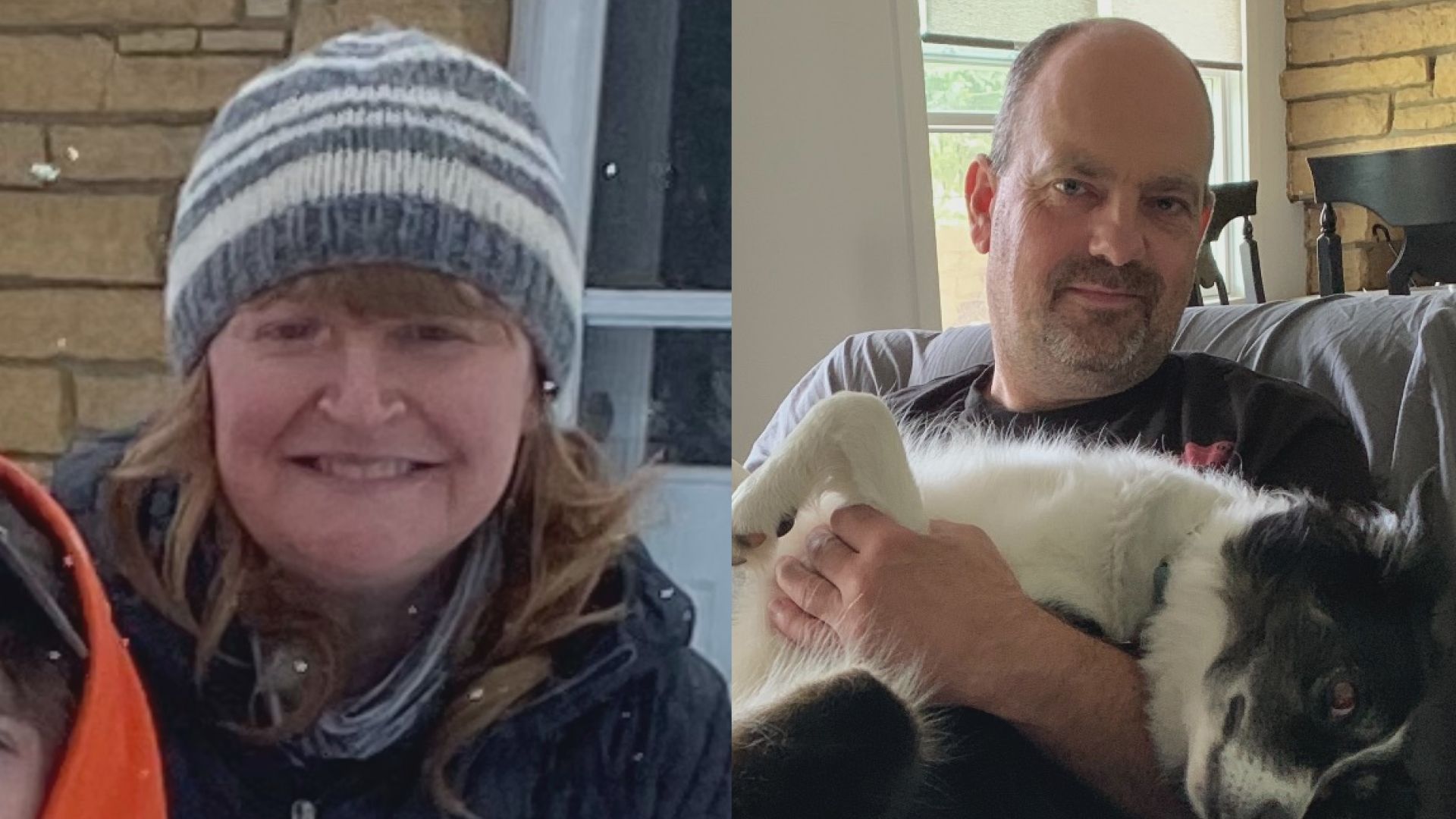 Bart & Krista Halderson were last seen on July 1 by a family member at the couple’s home in Dane County.

Chandler Halderson reported to authorities that his parents were missing on July 7. At that time, authorities believed the couple had planned a trip to Langlade County, Wisconsin over the weekend and family had been unable to confirm that they arrived.

At the time, he told investigators his parents and an unknown couple had left the preceding Friday morning to visit their cabin in White Lake for the July Fourth holiday weekend.

Immediately following the missing persons report, the Dane Co. Sheriff’s Office reached out to their counterparts in Langlade Co. who checked the cabin’s property but found no one there.

The sheriff’s office upped the status of the couple’s disappearance on July 8, calling it “suspicious.” Police arrested Chandler Halderson that day for allegedly providing deputies with false information on a kidnapping.

Human remains were also located July 8 in rural Cottage Grove. The remains were confirmed to be those of Bart Halderson on July 12. 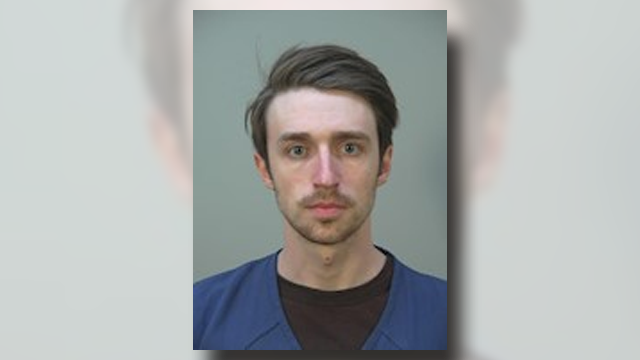 Dane Co. Sheriff Kalvin Barrett noted at that time that investigators had obtained a search warrant for the Halderson home.

“[W]e want to extend our condolences to the Halderson family,” Dane Co. Sheriff Kalvin Barrett said on July 12. “We understand that some of the details of this investigation are very difficult for them to hear and we want to be sensitive to that.”

Sheriff Barrett explained July 9 that as investigators continued interviewing the Haldersons’ family, friends, and neighbors, they developed information that led them to the location where the remains were found.

Prosecutors noted Monday, July 11 that witnesses claimed to have seen Chandler Halderson multiple times near a wood line outside the rural Dane Co. property, where his father’s remains were later found.

During a court appearance on July 15, Court Commissioner Brian Asmus set bail for Chandler Halderson at $1 million after arguments by prosecutors and Halderson’s attorney.

Defense attorney Catherine Dorl told Asmus her client is a lifelong resident of Wisconsin, has been involved in the Boy Scouts and church groups, and has no prior criminal history. She had asked that bail be continued at $10,000.

The District Attorney’s office also released a 14-page document that day detailing the investigation into the murder of Bart Halderson.

It contains several interviews with Chandler Halderson, friends, family and witnesses. The complaint does not specify when and where Bart Halderson was killed, but it does place Chandler at the site where Bart’s remains were discovered. 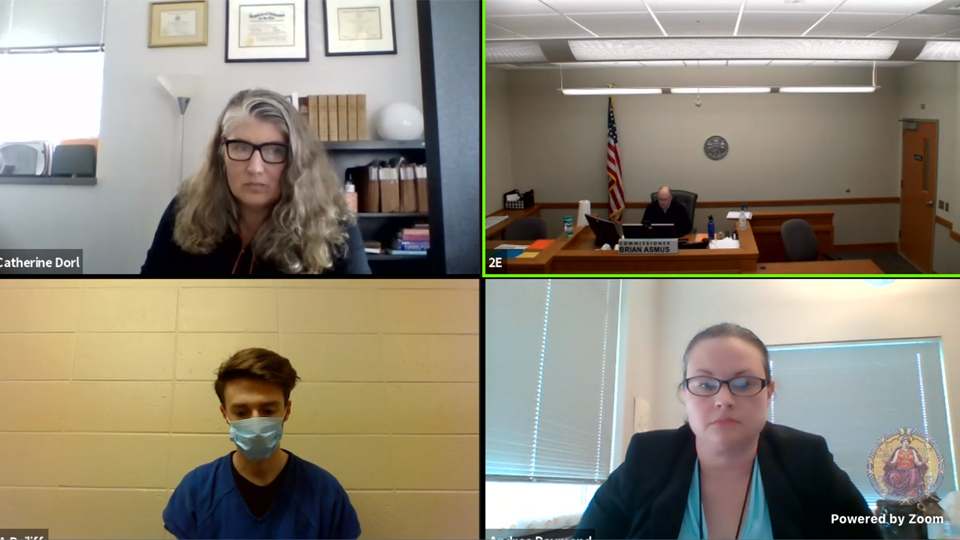 According to the complaint, a family friend greeted Halderson when he arrived on her rural property on July 8 in Cottage Grove, where Bart Halderson’s remains were eventually located. The friend asked Halderson if he was OK, and he said he was not OK, and that he was having problems reading words and numbers.

The statement goes on to say Halderson asked to use the pool, the friend said yes, and observed Halderson was gone somewhere between 1-1.5 hours and when he returned, the friend told authorities Halderson was not wet and the pool cover was still intact.

The friend also observed Halderson walking around to a shed nearby on the property, where she could not see what Halderson was doing. She told authorities after that, Halderson took a dip in the pool and “[appeared] to be washing off.”

According to the document, investigators spoke with a friend of Chandler’s, who says he brought Halderson a gun and ammunition on June 12.

During a search of the Halderson home, investigators found casings that would have fired properly from the type of gun Chandler Halderson had obtained from that friend. The complaint does not go into details about the whereabouts of that firearm, or if it has been recovered. 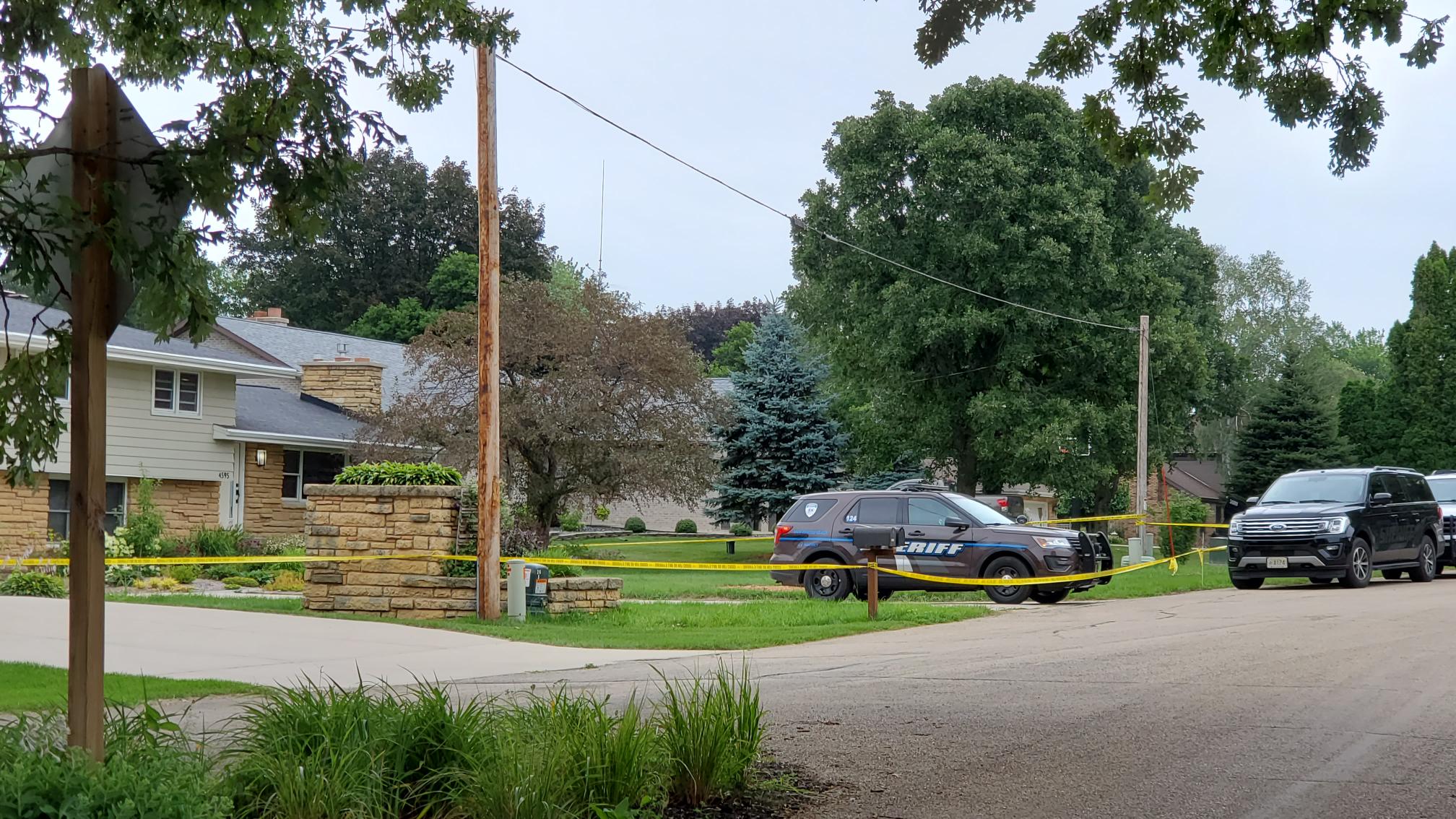 According to the complaint, Halderson went door-to-door and asked to look at home surveillance video from neighbors. An NBC15 News reporter interviewed Halderson on July 8; the day after Bart and Krista Halderson were reported missing, and before Chandler Halderson was arrested.

While in the neighborhood, the reporter saw Halderson doing precisely that, and told the reporter he wanted to see if he could catch a glimpse of his parents leaving the house.

The complaint says Halderson asked at least one neighbor for surveillance video and asked if the camera captured the road or his house.

The document also continually comes back to a foot injury Halderson had bandaged up.

The criminal complaint also revealed that a second portion of human remains had been discovered near Old Hwy 60 along the Wisconsin River, a Department of Natural Resources property, near the Town of Roxbury.

Investigators targeted a new location on July 20 as they searched for Krista Halderson.

The Dane Co. Sheriff’s Office revealed they had been searching the Waste Management landfill, near Johnson Creek, as they searched for her.

On July 22, Dane Co. Sheriff’s Office dive teams and a cadaver dog searched a pond near the home of Bart and Krista Halderson, as the search continues for the latter.

Dane Co. Sheriff’s Office Spokesperson Elise Schaffer said they began draining the pond to gain better access in the afternoon. She said a cadaver dog alerted them to certain areas in the pond, but crews had not found anything significant.

The search is not the result of any specific tips, she explained, and searchers went there because of its proximity to the Halderson’s home.

“It’s just an obvious location that we would want to search for evidence or anything that might be related to this crime,” she said. 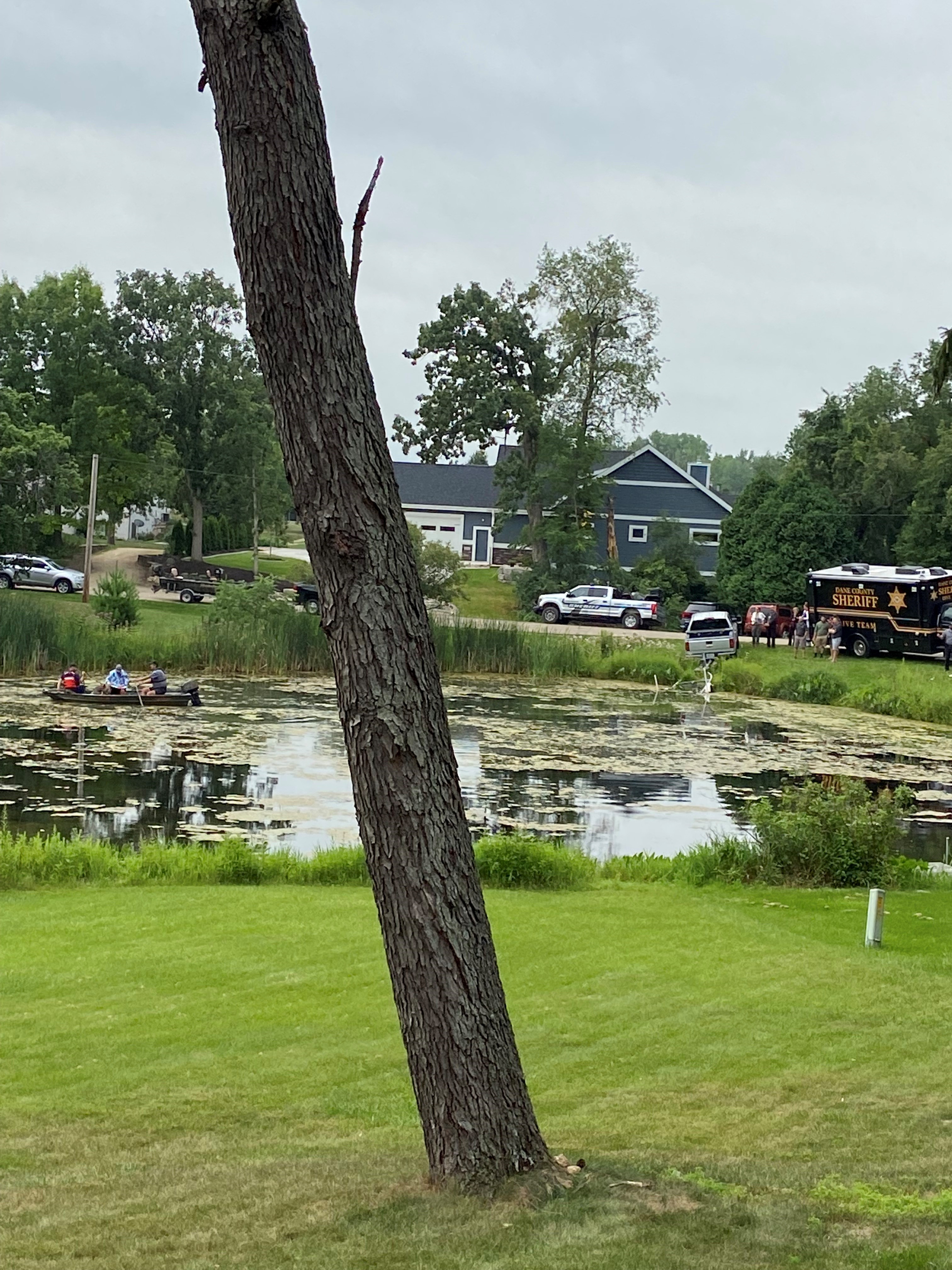 On Friday, July 30, the Dane Co. Sheriff’s Office confirmed remains located in the Town of Roxbury were that of Krista Halderson. As a result, its investigators asked the District Attorney’s Office to add a second first-degree homicide charges, as well as charges of hiding and mutilating a corpse, against Chandler Halderson, who was already faces the same allegations stemming from his father’s death.

“We have kept the Halderson family in our thoughts and prayers throughout this investigation and we extend our continued sympathies to them today. We ask that everyone allow them to grieve this tremendous loss with the utmost respect and dignity,” Sheriff Kalvin Barrett said that day.

Barrett also noted then that investigators found more human remains on Bart and Krista Halderson’s property. Those remains have not been identified and Barrett did not say if they were found inside the house or outdoors.

According to an updated criminal complaint August 25, it includes new information about when Krista Halderson was last seen and that authorities had found her and Bart Halderson’s cell phones and drivers licenses.

The same vehicle later pulls out of the Halderson’s driveway around 8:15 p.m. and stops at a Kwik Trip on the 4300 block of Windsor Drive in the Village of Windsor. A man goes in the store and buys two bags of ice. Authorities do not say who the man is.

Also in the complaint, a sheriff’s deputy states on July 28, he went to the Halderson home to process it. When he went into the garage, he found Krista and Bart’s phones and drivers licenses inside of a pair of shoes, wrapped in tinfoil and paper towels.

Authorities continued, saying they obtained text messages reportedly between Chandler and Krista that were sent on July 4 that discussed that they would be going to a parade, but the parade was actually scheduled for July 3.

Authorities also obtained Chandler’s Google search history, finding searches that referred to bodies being found, bodies being found in southern Wisconsin and his parents’ names. These searches were all made the morning of July 8, prior to authorities finding the remains of Bart Halderson later that day. 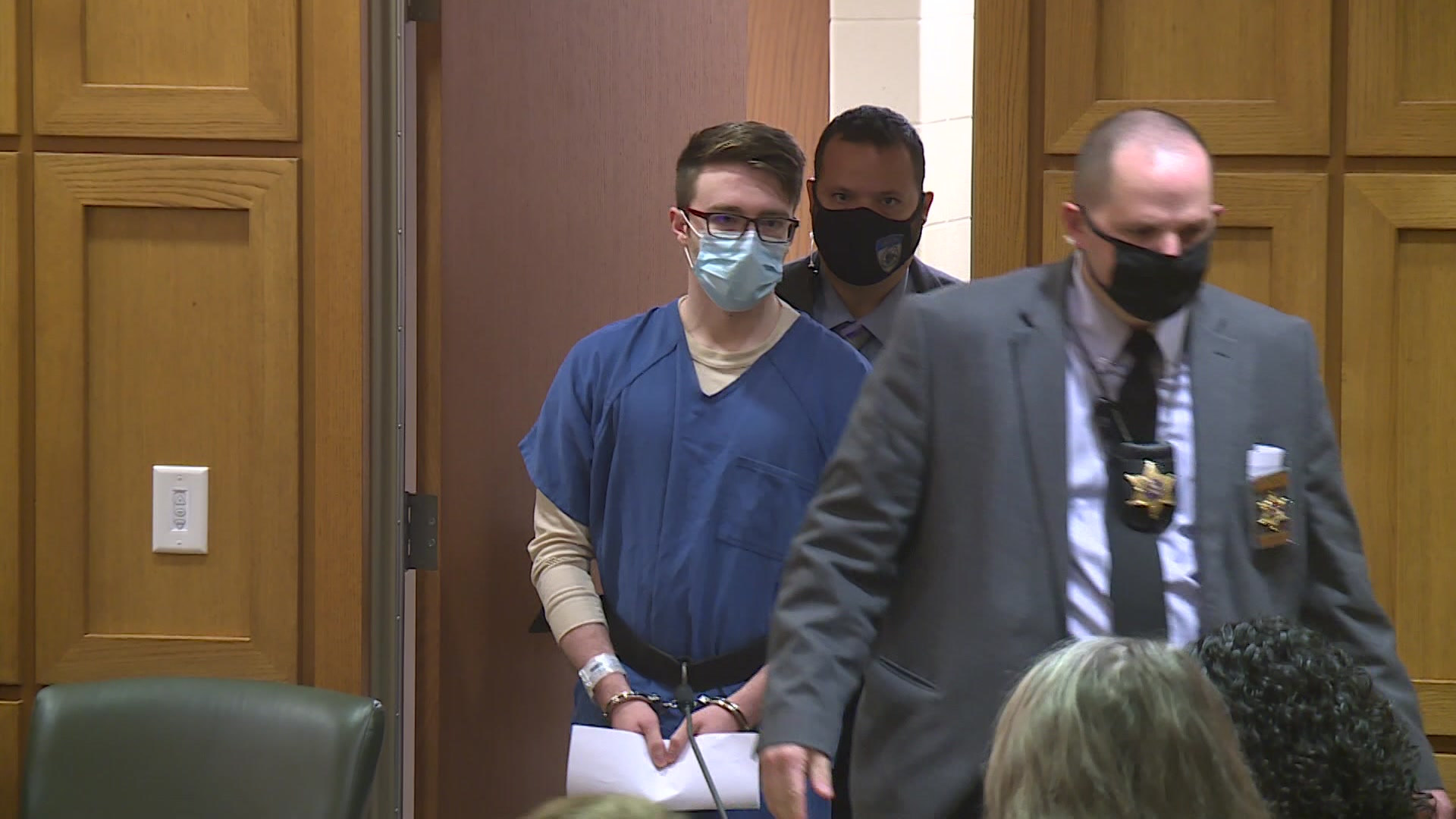 Chandler Halderson stood mute in court during his arraignment Aug. 31, leading the judge to enter not guilty pleas on his behalf. Later that night, court documents updated with a schedule of the 23-year-old’s trial dates. He withdrew his demand for a speedy trial.

In November, a judge denied the defense’s motion to prohibit news media from livestreaming court proceedings in the homicide trial. The motion was denied in part after NBC15 and other media groups fought to guarantee the public’s right to information in the trial.

A second motion, proposed to exclude the use of jail recordings and correspondence made by Halderson, was also denied in court.

On Dec. 29, Chandler Halderson appeared in court for a jury status hearing. It would be the final court appearance prior to the start of the trial.

When the trial resumes, prosecutors will continue making their case against the 23-year-old Halderson. Just hours before the revelation he had tested positive, Wisconsin Dept. of Justice Special Agent William Boswell had testified about what was discovered in Bart and Krista Halderson’s fireplace, including apparent bone fragments. Additionally, Dane Co. Deputy Scott Kuntz said showed light flickering from their fireplace early in the morning of July 2, 2021.

NBC15 conducted an interview with Chandler Halderson the day of his arrest, but before he was taken into custody and formally considered a suspect in his parents’ deaths. Chandler had only consented to an audio interview, which is why he doesn’t appear on camera.

NBC15 conducted a full interview with Chandler Halderson, 23, prior to authorities charging him with alleged homicide counts.

Teen released after lockdowns at Middleton High, 2 other schools

Farmer had no idea cows fell out of trailer and onto highway, Sun Prairie police say

The ripple effects of changes to the child tax credit